Following is the full speech Rawnak gave at the award ceremony in Haifa:‎

My name is Rawnak Natour. I’m an Arab woman, a Palestinian, a member of  indigenous minority ‎and a citizen of the State of Israel. ‎

Sami Michael once wrote that “The most tangible and adored homeland is the woman you love.” ‎And I can’t help but thinking that being a woman is the single aspect of my identity not under attack ‎in the current reality in Israel. ‎ 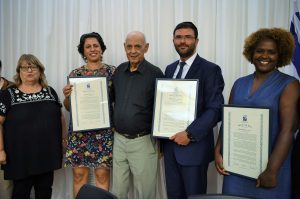 My mother tongue, Arabic, is conceived in Israel as the language of the enemy. As a Palestinian, my ‎Palestinian identity is derived primarily from being a part of the Palestinian people who have lived ‎here, in historic Palestine, long before the foundation of the State of Israel. And for that I am also ‎under attack – for “Identifying with the enemy.” ‎

Being a member of an indigenous minority, representing 20% of citizens in Israel, my right for ‎equality is constantly under attack as well. I grew up in Qalansuwa, a village located 16km from ‎Netanya. I remember as a little girl noticing the striking social gaps: the dirty streets of my home ‎village, the lack of infrastructure and basic social services, especially in comparison to Netanya which ‎I visited every 2-3 months, mainly for doctor’s appointments. Netanya was a clean and modern city, ‎where residents had all the necessary services and infrastructure. The little girl I was back then could ‎not understand the reason for these gaps, and was furious, but most of my anger was directed at my ‎family and hometown, where I couldn’t find even one bus line to take me to the doctor in Netanya, ‎and instead had to spend hours waiting for shared taxi to be full enough to depart. ‎

At a certain point I realized that we, the citizens, are not the ones to blame for the discrimination ‎against us and for the wide social gaps. Unlike many young Arabs who grow up feeling strong ‎resentment and alienation from their own society, I was fortunate enough to understand this reality‏ ‏fairly early. Today I can appreciate just how much these memories have shaped my life and my ‎professional path working for social change and reducing the gaps between Arabs and Jews.‎

My journey to advance equality and fight against discrimination started 20 years ago, and it is still only ‎the beginning. There were many stages to my journey. Today I’m co-directing Sikkuy together with ‎my colleague Ron Gerlitz – a remarkably insightful professional and a true optimist. Our partnership ‎is based on mutual respect and a strong belief in our ability to make a change. ‎

Sikkuy is a shared organization of Jewish and Palestinian citizens in Israel who work together as ‎equals on all levels. Together with our superb team, Ron and I work towards changing the reality in ‎Israel. This reality is a heavy burden on me personally as well as on Palestinians as a minority and a ‎people. This reality continuously impedes our efforts to create an equal, shared and healthy society ‎for Arabs and Jews alike. ‎

Despite the many difficulties, my colleagues in Sikkuy and I strongly believe change is possible. My ‎daily experiences have taught me that real and significant changes do occur. Always fostered by very ‎brave people, these changes help us advance a shared and equal society. ‎

In an article published in “Yedioth Ahronoth”, Sami Michael wrote recently that “Only a truly ‎audacious person can stand up and shout the cry of his trampled homeland.” ‎

Mr. Sami Michael, once again you have proved yourself to be the sheer embodiment of this ‎audacious individual, more than all of us. Especially nowadays, when so many human rights and ‎activists for equality feel persecuted and are being labeled “traitors”, you choose to stand behind us ‎and present an award to individuals who struggle to create equal opportunities and bridge social ‎gaps. ‎

Thank you for this award and for your life’s work: Your writing and achievements show us the way ‎and inspire us to dream, create and work for a better society in Israel for both Jews and Arabs!‎

On a personal note, I would like to thank my wonderful family, my partner Kim and my three ‎children: Adam, Malik and Noah. Thank you for your support, your cooperation and for having the ‎courage to pay the price for being part of this arduous struggle. ‎