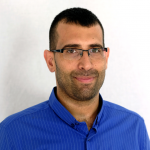 Amjad Shbita is a political and social activist, appointed Co-Executive Director of Sikkuy in March 2019, after working with the organization for seven years. He originally joined Sikkuy in 2010 as co-director of the Equality Policy Department, a position he held for two years. In 2014, he re-joined Sikkuy as head of the organization’s public activities in the Arab society and as co-manager of the Representation Index Project, which monitors the representation of Arab society in Israel’s Hebrew media.

In the past, Amjad served for six years as secretary-general of the Jewish-Arab youth movement Banki, managed Knesset Member Dov Khenin’s parliamentary bureau, and worked as a reporter for Al-Ittihad, the only daily Arabic newspaper in Israel, and as a member of its editorial board. He also worked for the “Kol-Zchut” (“All Rights”) website in Arabic.

Amjad is a social activist working for the advancement of peace, equality and the defense of democracy. He regularly publishes op-eds in both Hebrew and Arabic on the struggles of the Arab society and of the Arab-Jewish partnership in Israel.

Amjad holds an M.A. in Political Science from the Hebrew University (2012) and a B.A. in Communication and Management from the College of Management (2001). He resides in Tira with his wife and two daughters.