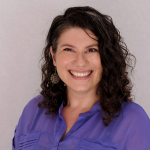 Nira Ben Ozer joined Sikkuy in 2017 as Coordinator of Digital Operations and Campaigns. Nira has extensive and diverse experience in media and production, as well as in academic research in communications and film. She is currently working toward a master’s degree in Film and Television at Tel Aviv University, researching representation in media and film in the context of the Israeli-Palestinian conflict; she also lectures and moderates panels at cinematheques. Previously she worked as a video editor and researcher, as a director’s assistant and associate director, and ran her own new-media business in video production and online content management. Nira is active in the Israeli-Palestinian movement Combatants for Peace.