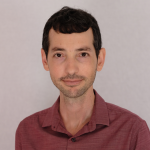 Ofer Dagan was appointed Sikkuy’s Co-Executive Director in 2019, after working in the organization for four years, first leading the Negev Equality Project then serving as Equality Policy Department Co-Director for two years.

Ofer first joined Sikkuy to coordinate Sikkuy’s work to advance services and infrastructure for the unrecognized villages in the Negev, and to advance ‎the successful implementation of the government’s 922 plan, designed to equalize allocations for Arab ‎citizens in the state budget.

Ofer completed a B.A. in social science and an M.A. in organizational ‎sociology at Ben-Gurion University. Ofer has worked and volunteered at leading local NGOs and social initiatives in ‎the Negev, including Shatil, the Negev Coexistence Forum, the Municipality of Beer Sheva, and Koach La-Ovdim (the Democratic Workers’ Organization).

During his time at Sikkuy, Ofer developed the organization’s expertise in advancing equality policies for Arab citizens and Arab local authorities and led significant processes in this area. Among others, Ofer led the process of expanding Sikkuy’s interventions in the Negev region, and the expansion of the Equality Policy Department, including developing a model for in-depth interventions with Arab local authorities.

Ofer lives in Beer Sheva with his partner, Maayan.