Sikkuy is proud and delighted to be winners of the NIF-UK Human Rights Award, for our contribution in promoting Equality and a Shared Society for the Arabs and Jews in Israel.

The Award was received by the co-general directors of Sikkuy, Rawnak Natour and Ron Gerlitz, in a celebration ceremony held in London in November 2018, together with more than 500 guests.

Rawnak Natour opened her speech with the words – “On July 19th, the Israeli Parliament passed a law, that was much more than that – it was a slap to the face. It was a slap to the face for people like me: Palestinian citizens in the State of Israel, and for Jewish and Arab citizens devoted to equality and shared society. Nevertheless, this slap has failed to stop us from rising each morning and leading the struggle, as it will also fail to bring down our partnership”. Ron Gerlitz emphasized the fact that Sikkuy works within a complex reality that brings both tremendous challenges and meaningful opportunities. He expressed his pride in the Arab and Jewish staff of Sikkuy, and his faith in the power of this partnership to win the struggle for equality, and to build, “brick by brick, the foundations of a shared society”.

For this occasion, NIF-UK produced a special video (press here) featuring two leading figures in Sikkuy. Nisreen Morkus, co-director of the Shared Society Department, speaking of the inspirational achievements of the “Shared Public Space” project that she leads. Morkus describes Sikkuy’s success in promoting the presence of Arabic language in the public sphere: leisure sites, public transportation and more. It is a large step forward in the struggle to change the public space in Israel – a shared one, for both Arabs and Jews.

Ofer Dagan is the co-director of the “Equality Policy Department”. In this video Dagan speaks of the critical importance of closing gaps in budgets and infrastructure between Arab and Jewish towns. He speaks also about the success of Sikkuy’s unique model of identifying the obstacles that block equality, in forming policy recommendations that address the obstacles and in advocacy that leads to altering government policies. This model has enabled our success in the wide improvement of public transportation in Arab townships.

We thank the New Israel Fund UK for this recognition of Sikkuy’s staff and achievement, and for this impressive ceremony. We also congratulate the fellow winning organizations: Ahuti and the Hotline for Refugees and Migrants in Israel, who lead a most just battle for the rights of refugees and asylum seekers. We are pleased and proud to be sharing this Award with them.

To the photo gallery: Press here

To an article about the event: Press Here 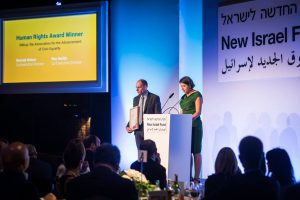